TLDR: DRAM is victorious in a lawsuit they filed against Rocky Mountain Soda for their scheme to falsely claim ownership of the DRAM brand and steal the DRAM trademark. Fulton and Koons (the Rocky Mountain Soda owners) counter sued for 25 million dollars and were awarded $0 ($ZERO) by the jury.

The story has gained a lot of attention on Instagram here, and this update. Ongoing Instagram stories about the dispute are here.

Who won the lawsuit?

The jury and judge sided with DRAM on the key issues in the case —  that Fulton and Koons are not, and were NEVER owners of DRAM, — and Shae and Brady are not members of the false entity filed by Fulton “Dram Drinks LLC”. Additionally, Fulton and Koons were awarded $0 on their counter suit.

SEE THE STATEMENT IN THE JUDGMENT »

What is the prevailing party?

Fulton and Koons are deceptively claiming there was no “prevailing party.” The designation of a prevailing party is used to award attorneys fees and costs, and does not have anything to do with the court judgment and final verdict – which was in DRAM’s favor.

Did they really attempt to trademark the DRAM name, artwork and logos?

Yes. Fulton did so under the guise of his secretly formed “Dram Drinks LLC” filed in late 2019. Shae and Brady are the only owners of the DRAM name, trademarks, artwork and logos, and have been since the founding of DRAM in 2011. Fulton and Koons failed to show any evidence of Shae or Brady asking or instructing them to file a new trademark for their brand.

Does Rocky Mountain Soda have other victims?

Yes. Over the course of the lawsuit we’ve spoken with 5 other companies that have had issues similar to ours. DRAM is the 2nd company to file a lawsuit for CBD ingredient deception. We are happy to share these communications with any interested parties.

SEE THE OTHER CBD LAWSUIT FILED AGAINST ROCKY MTN SODA»

Was there a proposed operating agreement?

Yes, Fulton proposed one for accounting purposes only, however it was deemed invalid by the jury. After it was sent to Shae and Brady, Drew Fulton deceptively added the word “exclusive” to section 10.10, granting himself the exclusive rights to the DRAM brand. DRAM was able to demonstrate this for the jury using the Google Docs History tracking function.

Shae and Brady would never have agreed to hand over exclusive rights of their brand they had been building for 5 years, to a man they had literally just met.

Was the proposed operating agreement valid?

No. DRAM never agreed to a document with the “exclusive” rights term. In the state of Colorado a “meeting of the minds” is required for a contract to be binding.

Additionally, Fulton and Koons testified under oath that all parties were together on June 17th 2016 in the Rocky Mountain Soda office located in Denver when the document was signed. The trouble with that story is that Shae and Brady were in New Orleans, with plane tickets, social media posts and hotel bookings to prove it.

Shae and Brady were able to show the jury that Moose Koons accessed the document for the first time ever in October of 2019, further evidence that it wasn’t signed until late 2019 — after DRAM had informed Fulton and Koons they were moving to a new co-packer. Why would he need to access the document if they had a fully signed copy in their office from 2016 as they claim?

Did DRAM agree to “exclusive” rights or the secret filing of “Dram Drinks LLC”?

No. Fulton didn’t even ask for Shae or Brady’s consent to give themselves exclusive rights to the DRAM brand in section 10.10 of their purported agreement. Instead, they kept it a secret.

On November 20th 2019 Drew Fulton accidentally CC’d Shae Whitney on an email with another party- in which he says he filed the document with the Secretary of State and registered a trademark, he’s not sure if it’s legal, but he’s hoping it will grant him ownership of DRAM.

What about the 9 News segment stating RMS/Colorado’s Best Drinks was shorting the CBD in their own products?

While co-packing at RMS we had several issues with product and manufacturing quality. As such, the 9 News report came as no surprise to us. Recent tests presented in court also showed cans of the “Colorado’s Best Drinks” brand had little to no consumable CBD.

We are Rocky Mtn Sodas second co-packing client to file a lawsuit against them for CBD ingredient deception.

SEE THE 9 NEWS REFERENCE IN THE LAWSUIT »

Were you really “in business together for years”?

No. The jury and judge found we were never “in business together”. DRAM was not, and are not partners of a co-owned business with Rocky Mountain Soda. They were  a co-packer of our beverages only, and they were paid in full for their services.

DRAM debunked their scheme by showing NONE of the traditional hallmarks of a co-owned business existed: no tax filings, no capital accounts, no employees, no sharing of losses and profits, no shared bank account, no separate federal tax identification number, etc..

DRAM chose not to utilize RMS as a co-packer anymore for several reasons – including CBD ingredient deception, constant manufacturing quality issues, a failure to track inventory in their warehouse, a failure to use packing materials of good quality, and an overall environment of dishonesty. Previous employees of Rocky Mountain Soda also testified on the stand that they regularly engaged in the bashing of Shae Whitney, and mistreatment of female employees of RMS.

During the trial, Fulton was unable to describe the location of the DRAM headquarters in Salida. Fulton and Koons were never invited to the private facility, as they were never owners of DRAM.

SEE THE RELEVANT STATEMENT IN THE JUDGMENT »

Why won’t Rocky Mountain Soda just accept the verdict and move on?

You’d have to ask them that. We are all disturbed by their attempt to argue their case in public. Their actions show a staggering disrespect for the 6 person jury that dedicated 7 days of their lives just before Christmas to study all of the documents and hear testimony from both parties, in order to reach a verdict.

The jury saw every single document posted to the bogus RMS “facts” site, and still ruled in DRAM’s favor. The behavior of RMS demonstrates a callous disrespect for the judicial process as a whole in the State of Colorado.

Has DRAM accused Rocky Mountain Soda of being predatory males?

Absolutely not. We have been advised by our lawyer through every step of sharing our story. We have made no such accusations in the public sphere anywhere. The public seems to have come to this conclusion on their own. Any fallout Fulton and Koons have experienced is the result of their own actions.

Salida CO, – March 28th, 2022 – The Denver District court ruled in favor of DRAM on their declaratory judgment claim in a lawsuit DRAM filed 2 years ago against their former co-packer. In 2020 Heyseed LLC /d/b/a DRAM filed a suit for declaratory judgment, breach of contract, negligence and deceptive trade practices against their former co-packer Rocky Mountain Soda, Colorado’s Best Drinks LLC (“Sparkling CBD), and their owners, Andrew Fulton and Christopher Moose Koons. After a 7 day trial the 6 person jury entered a verdict in favor of DRAM regarding co-ownership, finding that Rocky Mountain Soda, Fulton and Koons had no ownership interest in DRAM.

The dispute unfolded in late 2019 after DRAM informed Fulton and Koons they were moving to a new co-packer, citing deficiencies and CBD ingredient deception at the Rocky Mountain Soda facility.  The lawsuit states that Andrew Fulton (Owner of Rocky Mountain Soda) “filed trademark paperwork for “DRAM” and certain artwork and assets [including can art and logos] created by the plaintiffs.” He did this without the permission of DRAM, and kept it a secret from DRAM’s founders Shae Whitney and Brady Becker.

In an attempt to force Whitney and Becker to continue co-packing with them, Fulton secretly filed documents with the Colorado Secretary of State, purporting to create a new company called “Dram Drinks LLC”. The document purported to give Fulton and Koons 49% of DRAM profits, as well as exclusive bottling rights of DRAM beverage products. Fulton also attempted to tie DRAM’s trademarked artwork and logos to his new false entity.

The DRAM founders discovered these actions 1 month after they ceased operations at Rocky Mountain Soda, when Fulton accidentally CC’d Whitney in an email to another party about what he had done. 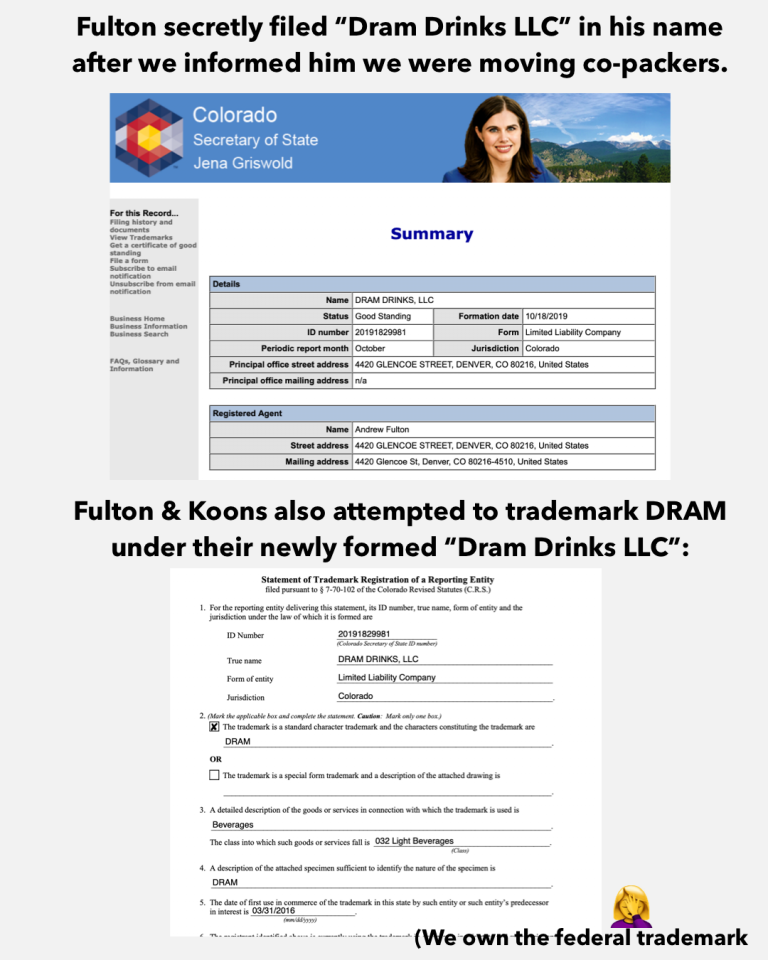 Andrew Fulton refused to remove the bogus entity from the Secretary of State, which forced the DRAM founders to file the lawsuit, naming Fulton, Koons and their brands Rocky Mountain Soda and Colorado’s Best Drinks. Fulton and Koons responded with a counterclaim stating that the DRAM founders owed them $25 million dollars for damages and future lost profits for their purported 49% stake in Fulton’s newly formed “Dram Drinks LLC”.

After a seven-day jury trial in December 2021, the jury sided with the DRAM founders on the issue of co-ownership, and the court entered declaratory judgment in favor of DRAM and its founders, stating “There was no partnership, LLC or company (“Dram Drinks, LLC”) co-owned by any of the Plaintiffs and any of the Defendants together.  The Court further declares that there are no corresponding rights or obligations of any type that exist or arise out of the purported existence of such a partnership, LLC or company.” 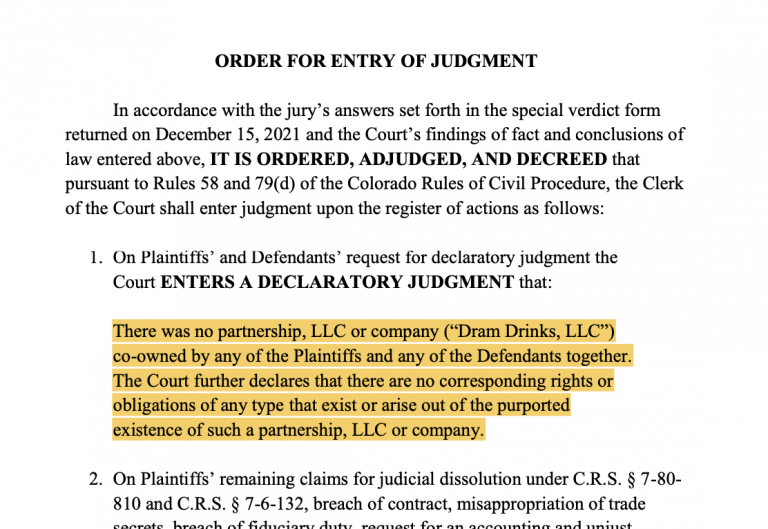 In 2019 DRAM immediately ceased co-packing at the Rocky Mountain Soda facility, after 9 News published an article stating Koons and Fulton were shorting the CBD amounts in their own beverage brand “Sparkling CBD”/Colorado’s Best Drinks. The 9 News report showed that their drinks should contain 20mg of CBD as stated on the can, however the independent tests showed much less. Recent tests ⬇️ presented in court also showed cans of the “Colorado’s Best Drinks” brand had little to no consumable CBD. Fulton and Koons stated during the course of the lawsuit that the “CBD” on the front of their can stands for “Colorado’s Best Drinks”, not the ingredient. (Instagram post confirming this).

Fulton and Koons were also sued by a separate co-packing client A1 Wholesalers in 2020, with a similar CBD deception complaint ⬇️ .

Although DRAM was unable to recover any monetary damages via the lawsuit, the Denver District Court declared Rocky Mountain Soda, and Fulton and Koons are not owners of DRAM on March 10th, 2022. See the Court Judgement ⬇️.

DRAM was represented by Kresl & Singer P.C. Attorneys at Law in Denver Colorado.

DRAM is a husband and wife owned company, a leader in their category nationwide, and a 4x Good Food Award winner. Since 2011 they’ve offered intentionally crafted sparkling waters, bitters, switchels and body products that capture both the beauty and flavor of Colorado. Their clean-label products contain no synthetic ingredients, “natural” flavors or preservatives. All product design and formulations are made in-house using a laborious plant extraction method invented by the couple. All drinks are certified PFAS and BPA free. All of their products have been crafted in their hometown of Salida, Colorado.

*These statements have not been evaluated by the Food and Drug Administration. This product is not intended to diagnose, treat, cure, or prevent any disease.
* All Products contain less than 0.3% THC.